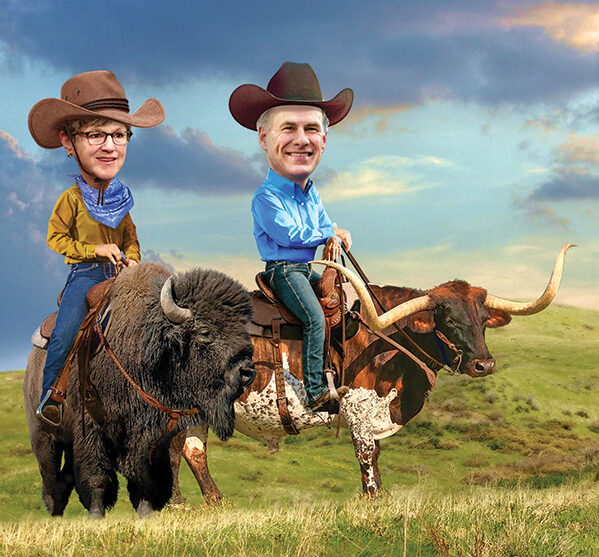 Atlanta, March 1, 2022: Texas and Kansas have won the 2021 Site Selection Governor’s Cups. This is the ninth year Site Selection recognizes the state with the most qualifying new and expanded facilities per capita, which Kansas claims for the first time ever for its capital investment activity in 2021. Texas wins for the 10th straight time for having the most qualified projects of any state.

The 68-year-old Atlanta-based magazine has awarded the Governor’s Cup annually since 1988, based on new and expanded corporate facilities as tracked by the proprietary Conway Projects Database. Site Selection, published by Conway Inc., is the senior publication in the corporate real estate and economic development fields and is the official publication of the Industrial Asset Management Council (IAMC, at www.iamc.org). Site Selection’s yearly analyses are regarded by corporate real estate analysts as “the industry scoreboard.” The magazine’s circulation base consists of 48,000 subscribers, most of whom are involved in corporate site selection decisions at the CEO/President/COO level.

Overall data from the full 2021 calendar year show a pronounced upswing in project activity compared to data from the pandemic-affected economy of 2020. The Lone Star State’s total of 1,123 projects is up by nearly 44% from its 2020 tally of 781. Ohio is second with 507, up from 419 in 2020. Next come Illinois with 480; California with 301 and North Carolina with 282. (See complete top 10 states and other Top 10 rankings from this issue below.) The biggest upward mover was California, which leaped to No. 4 from No. 16 last year.

“The Governor’s Cups recognize not only the winning governors, but their entire economic development teams, and by extension, the many professionals throughout their states who work every day to attract new investment and retain and grow existing businesses,” says Mark Arend, editor in chief of Site Selection. “Governors Greg Abbott of Texas and Laura Kelly of Kansas deliver the kind of business climate and fiscal predictability that capital investors from around the world rely on for long-term success, even during a year unlike any other in modern memory.”

Site Selection’s Conway Projects Database focuses on new corporate facility projects with significant impact, including headquarters, manufacturing plants, R&D operations and logistics sites, among others. It does not track retail and government projects, or schools and hospitals. New facilities and expansions included in the analyses must meet at least one of three criteria: (a) involve a capital investment of at least US$1 million, (b) create at least 20 new jobs or (c) add at least 20,000 sq. ft. (1,858 sq. m.) of new floor area.

Top Metros and Micros
In this year’s Top Metros rankings, Chicago-Naperville-Elgin, Illinois-Indiana-Wisconsin, was No. 1 for the ninth straight year among metro areas with populations over 1 million; Dayton-Kettering, Ohio, returns to the No. 1 spot it held two years ago among areas with populations between 200,000 and 1 million; and multi-time champion Sioux City, Iowa-Nebraska-South Dakota, was once again in the top position among areas with populations between 50,000 and 200,000. Among the biggest upward movers across the three population tiers were such metros as Los Angeles; Boston; Charleston, South Carolina; Des Moines; Sioux Falls, South Dakota; Bridgeport-Stamford-Norwalk, Connecticut; Saginaw, Michigan; and Muncie, Indiana. The online and print editions of the rankings also include Top State and Top Metros by U.S. region.

In the second year of the magazine’s Top Metros Per Capita rankings, Austin-Round Rock, Texas grabs the No. 1 spot among the nation’s largest cities; Sioux Falls, South Dakota, comes from out of nowhere to the No. 1 spot among Tier 2 metros; and Sioux City sweeps the Tier 3 category by topping the rankings at No. 1 per capita as well as No. 1 overall. Strong upward movers included Richmond, Louisville and Memphis.

In the magazine’s ranking of Top Micropolitans — cities of 10,000 to 50,000 people which cover at least one county — Findlay, Ohio, once again was tops among the nation’s 543 micropolitan areas, tallying 24 projects last year. It’s the 10th year in a row the area just south of Toledo has garnered the honor. Second place went to Tupelo, Mississippi, followed by Wooster, Ohio; Cullman, Alabama; and a tie between Auburn, Indiana, and Batavia, New York, for fifth place. Ohio once again led as the state with most Top 100 Micropolitans, with 17 of them tallying enough projects to account for 20% of the state’s total. Indiana had 10 Top Micros for second place, while Georgia and North Carolina tied for third with nine Top Micros each.

Mississippi River Corridor
In this same issue, Minneapolis-St. Paul-Bloomington, Minnesota-Wisconsin, and Union City, Tennessee-Kentucky are recognized as the overall and per-capita No. 1 metro areas along the entire length of the Mississippi River Corridor, based on private-sector facility projects tracked over an 18-month period tracing to July 2020. The Twin Cities’ 90 projects (up dramatically from 62 for the prio 18-month period) just edge out the 88 projects recorded in St. Louis, Missouri-Illinois. In the per capita category, Union City, with four projects, finishes just ahead Natchez, Mississippi-Louisiana, and Paducah, Kentucky-Illinois.

Charts of the March 2022 issue’s primary rankings can be found below. Full charts and data can be found in the rankings stories posted at the magazine’s award-winning website, www.siteselection.com.

Metros with Population Over 1 Million

Metros with Population Less Than 200,000

Metros with Population Over 1 Million

Metros with Population Less Than 200,000

Top 10 States with Most Top Micropolitans