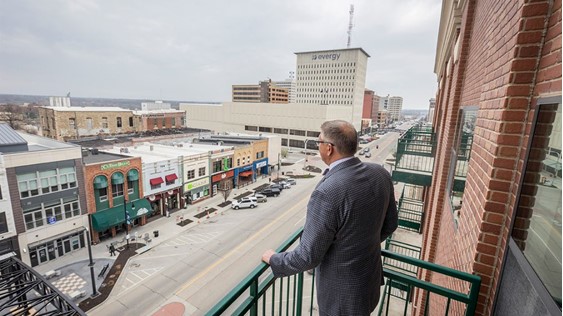 Topeka appears to be hitting a stride. But doubts linger. What will inspire more to believe in the Capital City?

New life downtown and community-wide collaboration fuels optimism. But concerns about how the city is perceived must still be addressed.

Concerns about quality of life, image, economy and public safety have been long pervasive, and confirmed in recent surveys, in Topeka. Changes being wrought downtown and beyond could represent a turning point in the narratives being told about and by the community. But it might still take time – and additional wins – for a more optimistic outlook about Topeka to fully take hold.

One of the key origins of this metamorphosis is located just a block away from the Capitol –  the Greater Topeka Partnership, an umbrella organization encompassing economic development, chamber relationships, downtown revitalization, tourism, leadership programs, equity and inclusion initiatives, and more.

Matt Pivarnik, president and CEO of the partnership, took the job in December 2015. While waiting for his family to join him in 2016, Pivarnik lived downtown for a few months and lamented the lack of establishments where he could grab dinner or a beer.

Pivarnik saw the city’s merits and potential immediately, well before many of the aforementioned enhancements and investments on Kansas Avenue and elsewhere in the community came to fruition. Fully committed, the father of three sons – one still at home then – moved not only his own family to Topeka but his mom, stepdad and in-laws too.

“My family’s lived all over the place,” says Pivarnik. “Although we all fell in love with Topeka right away, many people who had grown up here only saw the negatives. I was shocked by the pervasive self-loathing. There were definitely things to fix, but Topeka was a lot better than what its regional image should have been then.”

Read the full article by The Journal here